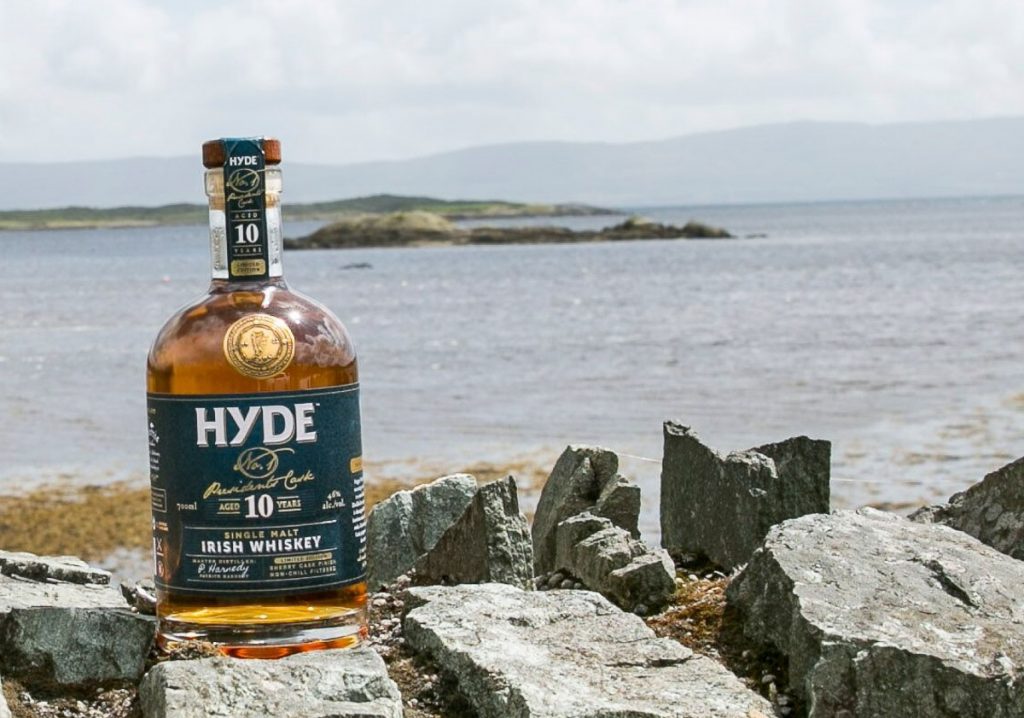 The Hyde family have a long tradition of being involved in the drink business in Ireland. They were well known Tavern owners at ‘Tinker’s Cross’ outside Bandon in West Cork from 1640 to 1962. Here the Hyde’s would sell Irish whiskey and draught Irish stout straight from wooden casks that they would tap by hand with a wooden mallet and a brass tap. The drink business runs in the Hyde family tree for over 12 generations. At one stage in 1916 their grandfather, granduncle, and grandaunt all owned an Irish pub in Bandon, West Cork. Today, Alan & Conor Hyde are the first generation not to own a pub in West Cork, Ireland, but the Hyde’s are still selling some of Ireland’s finest whiskey.

The spirit is distilled at the Cooley distillery in a traditional ‘Coffey Still’ from pure corn and barley grain. It is bottled with no chill filtration and at 46% abv.

The Hyde single grain is matured for 6 years in flame-charred first fill 250L Jack Daniels ex-bourbon barrels from Kentucky in the United States of America.

Grab a bottle from the Hyde range today and experience Irish whisky with a tasty difference. CLICK HERE

Taste: There’s that clove, warming and delicious. The subtle sweetness of the caramel and now the milk chocolate coats the mouth delivering creamy vanillas and a little pepper.

Finish: A long finish, it all come together here, more pepper and vanilla, the mouth is coated with charred oak complimented by a touch of sweetness and fresh barley.

Nose: More vanilla, think vanilla slice with creme anglaise and light caramel topping. The bourbon notes are more evident now as are the spices. This nose says drink me now.

Taste: The milk chocolate has sort of gone but there’s still a creaminess to this whisky. The vanilla is more subtle too but there’s now charred oak and the pepper is more suited to my palate.

Finish: It’s still a long finish and the whisky is still oily with pepper and vanilla. There less oak in the finish than before.

Nose: OMG! This nose is exploding. Cinnamon and clove more nutmeg which actually disappeared with the water. Smells sweeter, more like a hot and melted Tunnock’s caramel wafer.

Finish: Fresh and thirst quenching, pepper is huge at the finish.

We’ve reduced this whisky from $99 a bottle to $89 a bottle for a limited time. If you are a Distiller or Master Distiller member then there’s an additional 10% off this price too. Grab a bottle today. CLICK HERE

Feel free to let me know how you go at craig@thewhiskycompany.com.au