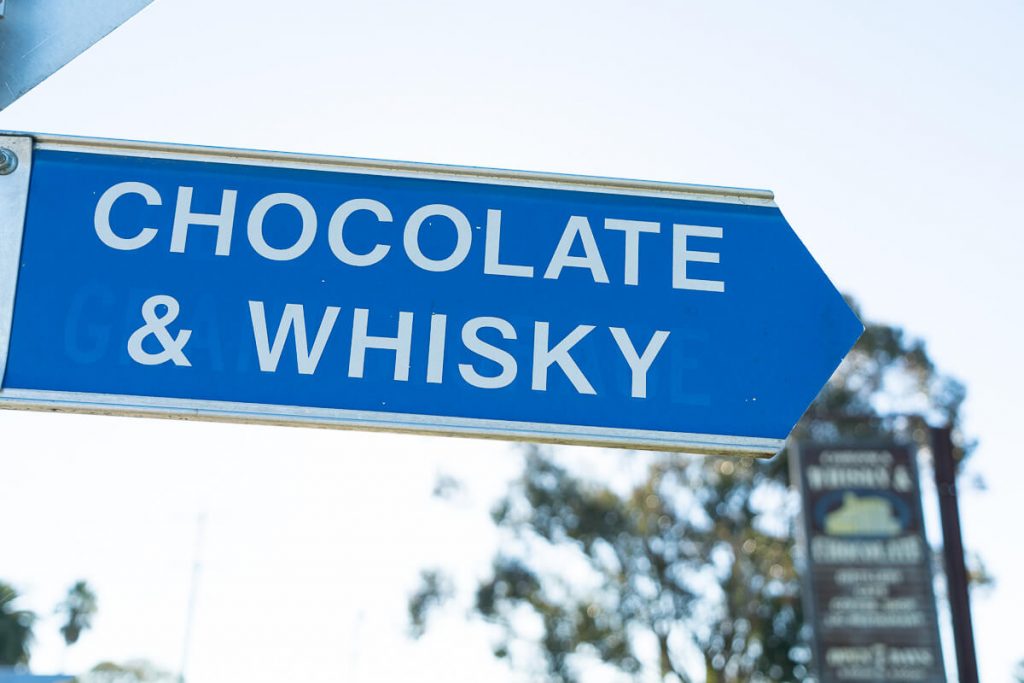 Corowa was a vibrant New South Wales town in the 1800’s due to its close proximity to the Murray River. As always, man found greater need to transport items quicker and so road transport became more popular and the town lost its vibe. The local flour mill which sits in the towns centre lay dormant for many years, that is till Corowa Distilling Co. negotiated to purchase it from the local council for $1.

Dean Druce, the owner of Corowa Distilling Co. owned the Junee Licorice and Chocolate Factory in Wagga Wagga, which was also based in a restored flour mill. This mill in Corowa experienced a major overhaul and after spending years on renovations turned this Corowa site into something magical. Ever heard of Willy Wonka’s Chocolate Factory? Well now add whisky to the equation and take away the kids!

With help from Head Distiller Beau Schilg, Dean has created a magnificent place to make whisky and chocolate. The combination is artistic and divine.

Taking old tawny port barrels, old sherry barrels and ex-bourbon barrels from the USA and filling them with fruity new make and waiting patiently for at least two years has now paid off. The wait is over and now we can all enjoy their hard work and the ultimate vision. The Corowa Distilling Co.

First Drop signifies the Corowa Distilling Co.’s first official bottled release after forming the distillery in 2010. The new make spirit is made by using barley grown in nearby farms and malted in a nearby malting factory. The idea of sourcing all the produce locally means every piece of the puzzle is looked after in close detail and the puzzle is built with care and precision.

This whisky is matured in ex-Port American oak barrels for no less than two years and is bottled at 63.1% abv. Each bottle is numbered and only 320 bottles were produced for sale in Australia. Grab a piece of Australian distilling history today.

Bosque Verde is the Corowa Distilling Co.’s 2nd release and signifies the distillery’s style and bottling design. Bosque Verde is Spanish for ‘green forest’ and this is the name of the farm where the bulk of the barley is sourced.

This whisky is matured in ex-Port American oak barrels for no less than two years and is bottled at 56.6% abv. Each bottle has been hand written showing the date of distillation, 15th of July 2016.

Finish: Long with mouth coating sweetness and plenty of fruity characteristics hanging about. A little nutty.

This Single Malt has been bottled by the Corowa Distilling Co. but the whisky inside is a Sullivans Cove Single Malt Aged 17 Years which was drawn from cask number 13 and bottled at 55.3% abv. The label tells it all and it’s the last of the casks chosen by Corowa Distilling Co. to be bottled as an independently bottled whisky from the Tasmanian Distillery. Matured in an American Oak ex-bourbon barrel for 16 years and then finished in an ex-Sherry barrel for 12 months this whisky delivers everything you would expect from Sullivans Cove and more. Matured for the right amount of time and distilled to perfection.

With an outturn of approx. 450 individually numbered 500ml bottles this is the one to complete the trio collection of bottling’s from the Sullivans Cove Distillery bottled independently by Corowa Distilling Co.

Palate: The chocolate is still present with wonderful bitter sweetness, spicy and fruity.

Kavalan ‘The Taiwanese Superstar’
Next
The Greatest Southern Distilling Company!