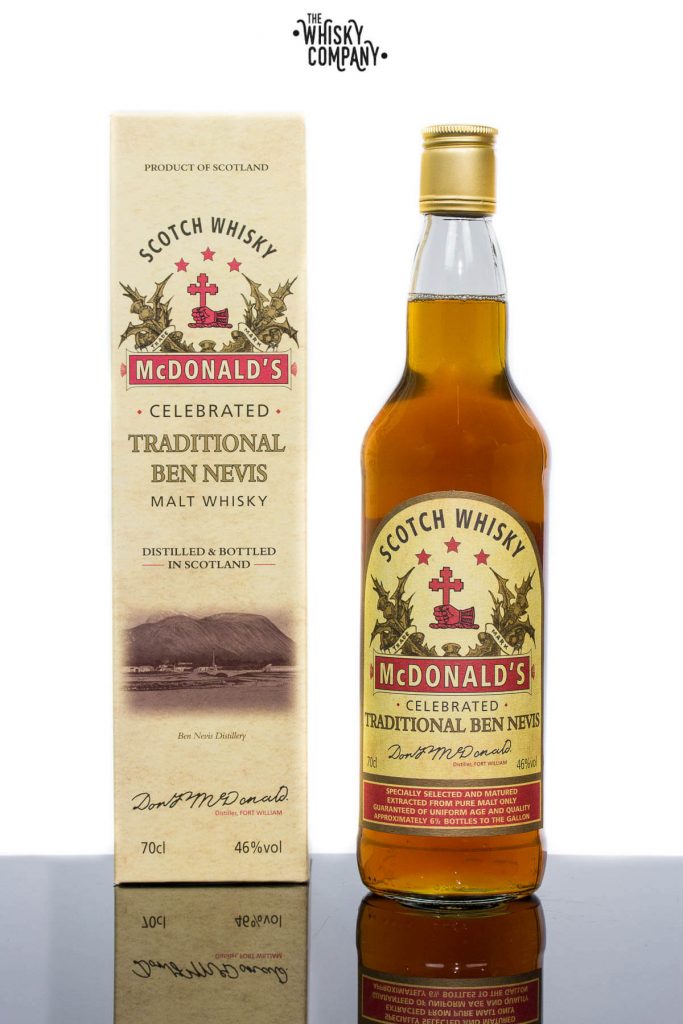 I have to say that first off this one is not made by Ronald nor does it have anything to do with burgers but it is nice with salty fries.

This is a special edition bottling that celebrates the distilleries 185th anniversary and I have to say it celebrates it with a bang. Now, if you’re currently sipping on the Ben Nevis 10 year old and enjoying it, you’re going to fall in love with this dram. Last time we got this in we sold out in a day, yip 24 hours. In writing this review we have made our way through quite a number of cases already.

The McDonalds Traditional Ben Nevis is a single malt whisky portraying the distilleries current style of whisky but using a more heavily peated spirit. It’s replicating how the whisky used to be in the 1880’s. The malt for this one is sourced direct from the Port Ellen malting’s on Islay and is peated to around 35ppm. Not one of those whiskies to match Ardbeg or Laphroaig but the barley has been given quite a considerable amount of smoking.

The label design and the bottle shape itself does not look that entirely flattering but that’s what makes this whisky even more appealing. A lesson in not judging a book by it’s cover so to speak. It’s good whisky placed in a bottle and ready for drinking.

Taking a look at what is inside the bottle you’ll be surprised. The Ben Nevis characteristics of toffee, chocolate, nuts and orange notes, coffee and chewy oak are still there but there’s a peating level in this that says “I’m not too peaty but I’m here’ that rounds out the whisky perfectly. The Sherry barrel maturation gives a perfect amount of sweetness and compliments the toffee characteristics.

It’s been given a Gold Outstanding Medal in the category of Non Age statement at the International Wine and Spirits Competition but most importantly I’m giving it two thumbs up.

Check out my tasting notes

Taste: Extremely smooth and easy drinking. In the first mouth-full there’s plenty of honey and smoke as well as salted butter and peanuts. Rich, sweet and mouth-coating. Coffee, Chocolate and chewy oak.

Finish: The peanuts are still hanging around as is the salted butter and smoke. More toffee and a little hint of vanilla. Milk chocolate perhaps. An enjoyable dram.

Most reviews have this whisky as a limited edition but we are really pleased to say that this single malt is now part of the core range but sad to understand that it will replace the 10 year old which is no longer being produced.

This single malt is a hidden gem and I’d strongly suggest grabbing a bottle or two as it will form part of the core range in your collection.

A Stark Contrast #2
Next
What’s new this month? – May